The term ‘social sculpture’ was coined by Joseph Beuys in the mid 1970s to describe his ‘expanded conception of art’ in which every human being is an artist called upon and capable of shaping a humane and ecologically viable society.

The evolution of the concept can however be traced through all Beuys’ work – from his understanding of ‘drawing as thinking’ to his work with ‘the invisible materials of speech, thought and discussion’ in the Honey Pump and in the Free International University.

But Beuys’ ideas and the social sculpture impulse have roots further back than this. In addition to Beuys’ influence in this expanded field, social sculpture is part of a stream of questions and experiments undertaken by thinkers, poets and investigators like Goethe, Friedrich Schiller, Wilhelm Schmundt and Rudolf Steiner. As we go deeper into Beuys’ work we encounter his intensive engagement with the work of such explorers and come to understand their significance in shaping his social sculpture insights and proposals. 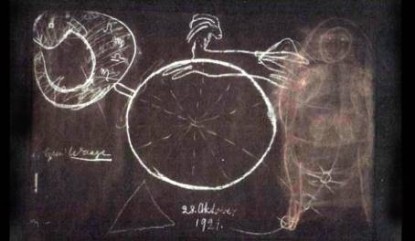 In one of the last lectures that Beuys gave (when he received the Lehmbruck prize in 1986) he spoke about the need to “protect the flame” that had inspired and led to this expanded conception of art. By following the threads and understanding the significance of Goethe’s ‘new organs of perceptions’ and Schiller’s call for the ‘aesthetic education of the human being’, one does just that.

The writings and reflections of people connected to the SSRU and working actively in the field of social sculpture map and articulate this substance that flowed into Beuys’ work. (See Publications section)

The transdisciplinary perspectives and practices of social sculpture today are also influenced and inspired by many other disciplines, movements, practices and thinkers. These include the work of Ivan Illich, E.F.Schumacher, Tagore, Vandana Shiva, Thich Nhat Hahn, Henri Bortoft, David Abram, Joanna Macy and David Bohm; James Hillman and other archetypal psychologists exploring the role of imagination in transformation; human and cultural geographers – in particular those engaged with citizenship, autonomy and agency, and the many movements working to shape a different kind of world: the anti-capitalist movement, the eco-art movement, the groupings mobilizing against the climate crisis, the permaculture movement, and the many alternative money, self-organisation and democracy movements.

These past and current understandings and explorations stream through our work now to meet, as Beuys described it, ‘the cause [that] lies in the future’.

In this sense many beings past and present are brought into contact with our own attempt to ‘listen to the future’… and they inform social sculpture’s contribution toward the shaping of a more in tune, humane and ecologically viable future.